Chronicles of Sebastian ... My introduction to the Naija Style of Worship

Praaaaaise the Lord! I vividly remember the first I went to a local NIFES (Nigerian Fellowship of Evangelical Students) meeting. I was amazed that from my small university more than 100 students gathered together at 7 am to worship (most of my German fellow-students are still in bed at that time!) . 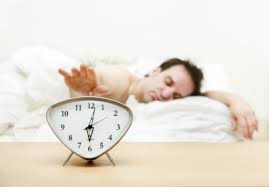 What was even more amazing to me was the way they worshipped. After some songs, a person to my left began to laugh loudly (I think it was called holy laughter), another person to my right wept bitterly while a girl in front of me fell down after someone prayed with/ shouted at her. Others started hugging each other. It seemed everyone was praying in tongues, the whole room was full of noise and soft music. As a reserved German who is used to order, solemnity and “sequential prayer” (one prays after another), I felt a bit awkward and did not know what to do. As it turned out, I did not need too: A stranger approached me, laid hands on me and started mumbling something. Finally, the leader grabbed the microphone and ended the prayers with a loud IN DA MIGHTY NAME OF JESUS!!! which was answered with a resounding AMEN!
Well you might think what’s the big deal Sabba? What is so special about all of this? My point is that even though you might be familiar with the Nigerian way of doing church, as an outsider a lot of things will strike you, as you realize that Nigerian Christianity is vastly different from Western / German Christianity. Before I start pointing out some differences, let me just say that God loves diversity and that one form of Christianity is not necessarily better than another. Please don’t assume that I pretend to 'know it all'; I strongly believe that we can all learn from our unique strengths and weaknesses. So let’s go! :) 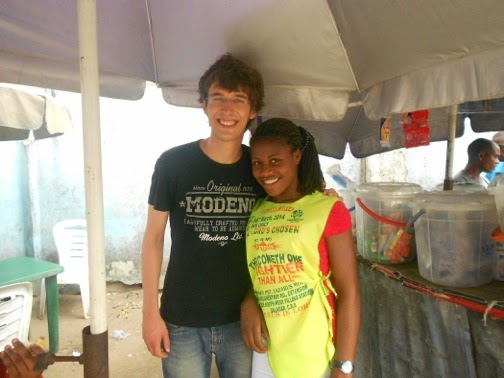 1.) Religion is super-important in Nigeria. In Germany, faith does not play a major role in public discourse and in the day-to-day lives of people. Most of my fellow-students don’t pray, don’t read their bibles, don’t go to church and hardly ever talk about Jesus or the Bible. In Nigeria, that was quite different. First of all, in the South-East, everyone claimed to be a Christian. Hardly anyone described himself as an atheist, some people did not even know that such people exist!
In addition, I noticed that people used a lot of 'God-talk”: “God bless you”, “We thank God”, “… by the grace of God”; … and if something bad happens they say things like “Holy Ghost fire!” or “Jeesus!”. Most public speakers thanked and blessed God before they started speaking. Also, when you walk through a city, you see a lot of cars with Christian messages (eg “Pampered by Jehovah”). On Sundays, most churches are full, whether it’s a Catholic mass, a revival service or any other church: many people still go to church. 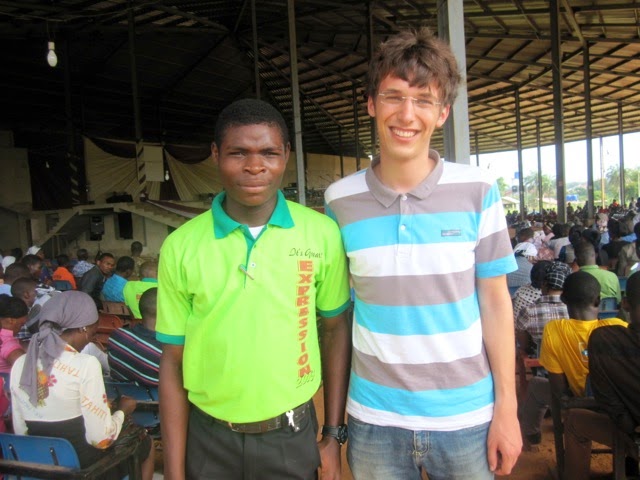 2.) There is quite a lot of “Cultural Christianity” in Nigeria. As I pointed out, Christianity surrounds everyone in Southern Nigeria, and that causes some people to just assume they’re Christians because, well everyone is: parents, friends, neighbors. Sometimes I asked people how they came to be a Christian and quite a few people thought their Christian upbringing makes them Christian. I’ve not met that many people who changed their denomination (let’s say from Catholic to Pentecostal), which makes me wonder how much the parental background influences people and how many people actually reflect whether what they believe and practice is right or wrong.
The issue with cultural Christians is that they usually lack the intimacy with God and the supernatural power to live the Christian life. If every Christian in Nigeria actually practiced what he or she believes in, there would be FAR less corruption, jealousy, tribalism, materialism, stealing, lying, adultery etc. The fact that these things exist shows me that there is still a gap between what people believe and what people do (which is the case in many countries!). A few times, I got the opportunity to preach to some of my Nigerian brothers and sisters, and one thing I’ve noticed is that when I addressed simple and practical issues like friendship in a way that relates to their life, many people were quite astonished, because I think some Christians were not used to the thought that God has to say something about every area of life.

3.) Many Nigerian Christians are bold and firm. I so love this. In Germany most Christians try to defend themselves (“I am a Christian… but I am still nice you know??") and are very timid and overly cautious when it comes to sharing their faith and identifying themselves as Christians. Most Nigerians did not seem to care. They are proud of who they are and don’t care too much what you think of them while they’re worshipping whole-heartedly. I saw Catholics wearing wristbands stating “Proudly Catholic”, I’ve met Deeper Life guys trying to convince me they’re the real deal and I’ve been preached to in Kekes. I’ve seen NIFESians going on evangelism frequently and I’ve met Pentecostals telling me I’m not saved because I don’t speak in tongues (abi?? lol). Furthermore, people have big dreams: one mission statements I saw seemed quite ambitious: a church wants to “reach 10 billion souls”. Although I don’t agree with everything, I just love this kind of boldness! Heck, we can talk about everything, but why not make clear what we think and believe? I think many Westerners need to be inspired by this kind of confidence. 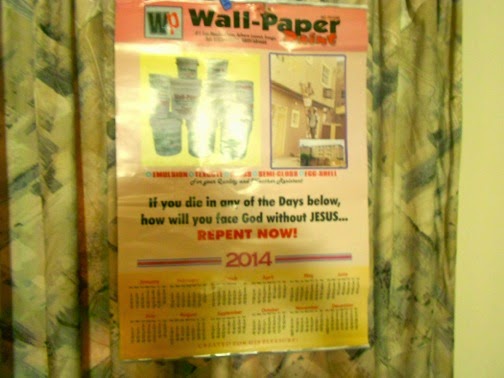 4.) Nigerian churches are less “seeker-sensitive” and personal in their nature. While many Nigerians are really bold, there is this element of vulnerability that I’ve missed. Let me explain what I mean: Many German Christians love deep and private discussions. People meet in small groups, sit in a circle and talk about their problems, their doubts and their life. Then people share prayer points and pray for each other. If they go to church, they are likely to hear a sermon on 'Being on a Journey', 'Finding your True Identity', 'Dealing with Hurt', 'Living Authentically' and sing some songs on how we can come to Jesus “as we are”. Now let me just say that, as a guy, we white people often overdo these kind of activities and get a bit too sentimental. To me it feels a bit weird to me to sing about being in Jesus’ bosom and sitting in an “understanding” small group that revolves around itself too much.
Yet, when I went to Nigeria I found out others went to the other extreme: There is so much shouting from the stage (“Open your mouth and pray!”) and people are encouraged to just go ahead and pray, without listening to other people’s prayer requests. I’ve hardly found any small group setting where people talk about their struggles in an honest and open way. I’ve realized many Nigerians were just not used to talking this way. That’s why I was so encouraged to read this blog (and the comments), because I love the way people open up and connect it to God. Maybe I’ve just been in the wrong environment, but I’ve not seen that often in Nigerian churches.

5.) The prosperity theology has unfortunately corrupted some Nigerian churches. Prosperity theology basically assumes that the primary aim of the Christian life is your personal wealth and well-being. It is a man-centered approach, since God is often only used as a tool to bless you. This kind of teaching was developed and promoted mostly in America and it has sadly spread to many Nigerian churches as well.
The problem of prosperity gospel is that it is unbalanced. Yes, God wants to bless us, but He also demands a lot of things. Jesus speaks a lot on suffering, sin, taking up your cross, self-denial, sanctification, holiness etc. Some churches, in an attempt to appeal to the audience, neglect these hard teachings. I’ve challenged some Nigerians and asked them “Are you more interested in the blessing or the blesser?”, which got a lot of people thinking. Don’t get me wrong I’ve found a lot of AMAZING churches with very balanced teaching and very devoted Christians. But I just can’t overlook the fact that sadly, this prosperity teaching has produced a lot of consumeristic, selfish and immature Christians who just want to get their next portion instead of serving their next neighbour.

6.) Many Nigerian church services are very lively and joyful. Compared to Nigerian Church services, some German church services make me feel as though I were at a funeral! (lol) I just loved the clapping (put your hands together for da Lord! :) ), the dancing (even for offerings!), the way preachers interacted with their audience (Hallelujah? Amen!), the uplifting music (I’m still listening to Nigerian chorusses!), the fact that Nigerians have their own songs (like Today-Oh) and in general the joyful atmosphere in many services. Time never really seemed to be a burden, there was always plenty room for worship and for sermons. 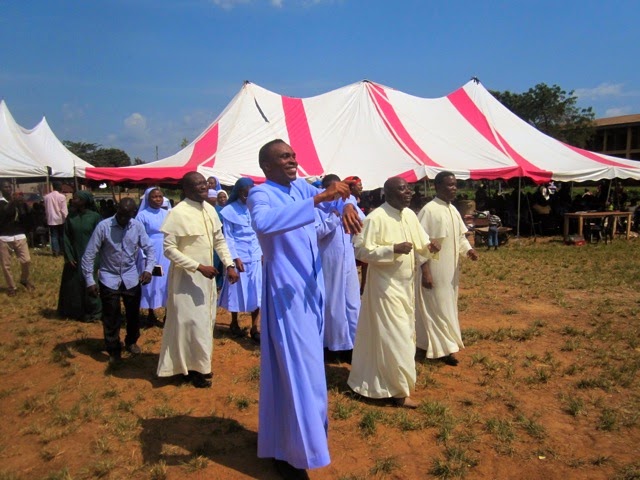 7.) There is a strong focus on spiritual warfare. I don’t really know whether this is a good or a bad thing, but Nigerians seemed to emphasise the spiritual realm FAR more than we oyibos :-) I’ve seen some posters claiming 'That witch must die!' or 'This is war!' Chai! I’ve also heard a lot of talk on 'destinies', fighting curses etc.. To be honest, this stuff seemed a bit 'too much' for me, but you know what? I just don’t know what is happening and I don’t want to judge something I’m not sure of. 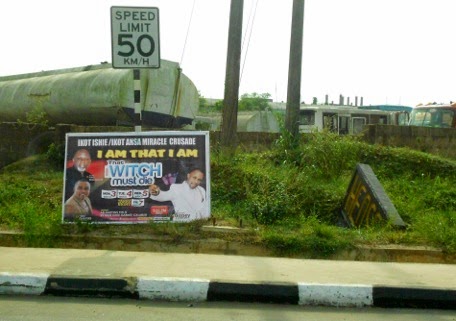 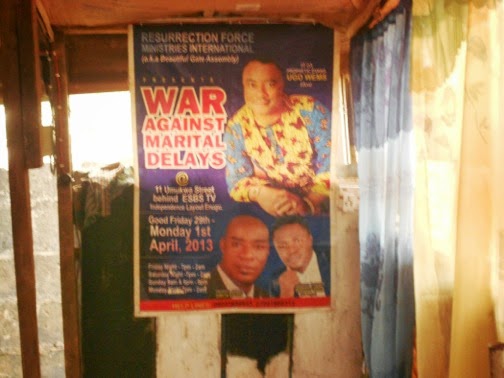 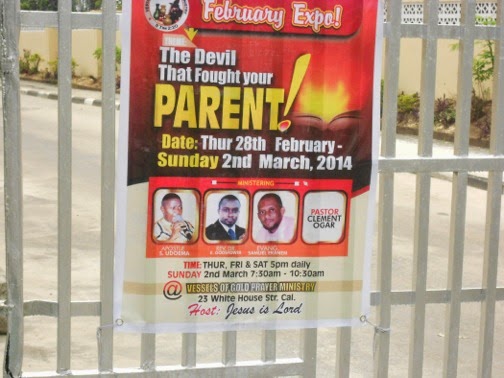 All in all, I am very grateful having experienced Nigerian Christianity, despite all the differences in style of worship I’ve pointed out. One major thing I’ve learned is that Christ enables us to have true fellowship with one another, beyond color, background, social status etc.. Standing shoulder-to-shoulder with my Nigerian brothers worshipping the Lord and feeling this heartfelt connection of belonging to the same God was a precious experience. God has his people everywhere, and in Nigeria He directed me to some incredible Christians that taught me a a lot! Every culture has its own strengths and challenges when it comes to practicing one’s faith, but as long as we are teachable, humble, loving and accepting we can learn and grow a great deal and “make heaven” :) And surely, Goodness and mercy…

Thank you Sabs for another honest and insightful yet witty post! It is interesting to see things from an 'outside' pair of eyes.. I found my self laughing at some descriptions and nodding knowingly at others, being able to definitely identify with them. One thing I am learning in recent times is to appreciate the beauty of diversity and to understand that God has made each one of us unique - our expressions are so different, yet like my favourite German :-) said, it's a precious thing indeed and it goes further to show the awesomeness and brilliance of God! Hope you enjoyed as much as I did :-) ... For all Chronicles of Sebastian's posts, please click HERE.. Join Sabba again next week Wednesday..I look forward to what he will be speaking about!

Email ThisBlogThis!Share to TwitterShare to FacebookShare to Pinterest
Labels: Chronicles of Sebastian