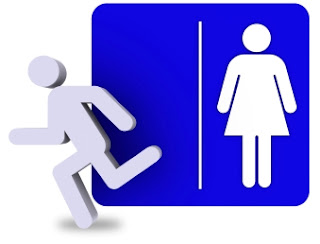 Ladies, has it ever bogged you to know why that fella called it quits? Well here are some responses some guys gave to an MSN survey..
And fellas, do you think that reason you gave was incredulous? Well, you need to get a load of some of the reasons given. I didn't know whether to laugh or shake my head!

Oh my goodness, what can the ladies do right with all these mainly unrealistic expectations!! But some people are vain though! ... But before you judge, think deeply about that particular individual and why they just 'irritated' you.. Your answers may not be that different :-) (God help us right?!).

And some of the responses are food for thought, some of the 'little' things we do that are seemingly irrelevant could be a BIG deal..

1. “I was on the phone to a girl I’d been seeing for a few weeks. We got into a disagreement about something trivial, and she hung up on me. I was furious – it was like she’d hit me in the face. I never rang her again.” (Temper-Temper!)
2. “She always wore foundation on her face, including first thing in the morning. Her skin was fine underneath it – a couple of spots but nothing major. But she had this compulsion to wear foundation. It was massively unsexy.” (Oh oh, I need to be more faithful at my nightly rituals!)
3. “I cooked her a curry one night and she only ate a tiny bit because she was on a diet. Dumped.” (No problem there, *belch*)
4. “She had actual conversations with her cat while I was there.” (LOL, even I would dump myself!)
5. “I dumped my ex as soon as she started acting like more of a lad than I did. I’ve nothing against swearing as such, but it’s not nice if a girl swears all the time. It made her seem thick.” (err.. take back that belch!)
6. “I had to do all the talking on our dates. Maybe she thought that she was doing herself a favour by keeping her mouth shut, but I prefer women to talk too much than too little. I don’t want to do all the work.” (Mehn, I have done this before oh, I was just too nervous on the date #fail)
7. “She kept failing her driving test and I was fed up being her chauffeur.” (I guess he wasn't a fan of driving Miss Daisy ey?)
8. “She slept in a night dress.” (erm....?)

9. “When I first met her she was wearing a fairly loose T-shirt and she looked great, but once we started seeing each other she was always in figure-hugging clothes. I’m not a chauvinist – a woman can wear what she likes – but I don’t find tight clothes at all attractive.” (Hmm, a rare brother!)

10. “She ironed my boxer shorts.” (LOL, did I hear you say Stepford wife?)
11. “About two weeks after we moved in together she started wearing jogging bottoms around the house. The second she got in from work, on they went. She actually looked quite sexy, but I didn’t like what it meant – it was way too cosy.” (The curse of over-familiarity)
12. “She cut her beautiful hair short.” (I have surprisingly heard that guys find long hair such a big deal, Brazillian yes?)
13. “She pointed out that I’d put on weight.” (Back to sender)
14. “My girlfriend stopped keeping any secrets from me. It was like I’d become her best female friend, and she told me everything – things her mum said, period pains, workmate stuff. Too much information for me.” (*confused*)
15. “She was funnier than me.” (Baby let me upgrade you!)
16. “She never bought me dinner. At first I wanted to pay for our dates because it made me feel like more of a man, but there comes a point where you want her to stump up too. It never happened.” (Ladies, be kind :-)
17. “I was on a mate’s stag weekend and got back to find that my girlfriend had re-organised all my DVDs. That was pretty much my sole reason for ending it, and I haven’t regretted it.” (hehe)
18. “I finished with a girl because she couldn’t go out anywhere without completely over-dressing. Even if we were going round a friend’s house, she had to put on make-up and blow-dry her hair. It must have been really hard work being her.” (Some guys really don't send all that #thankYouJesus)
19. “My ex was late for absolutely everything. It’s not even like she spent ages getting ready to go out. She just had this mental thing where she wouldn’t leave the house until she was too late to meet me on time. It drove me insane.” (I guess African time wasn't really working out)
20. “Her bed was covered in cuddly toys.” (What were you doing in her bed? *raised eyebrows* :-P
21. “She slept in this big mound of pillows. If I was staying at her place and I fell asleep without throwing off all the pillows, I’d wake up with neck ache.” (Pay for massage lessons)

22. “She had a dog and she always smelt a little bit of him.” (I'd dump me!)
23. “She told me off for answering my phone at dinner. People around us could hear her moaning at me.” (Mona-Lisa)
24. “Whenever I wanted to watch a DVD at bedtime and snuggle up together, she’d either fidget or fall asleep.” (Guilty, oh no!)
25. “My previous ex had dumped me out of the blue. I was completely over it, but I was worried that my new girlfriend would do the same, so I finished with her first.” (hmmmmm)
26. “She could never remember anything that happened in films we’d seen together, but she remembered every single incriminating thing I’d said during arguments.” (hahaha, end!)
27. “Her feet were always freezing in bed.” *rolls eyes*
28. “She accused me of snoring, so I was always too self-conscious to go to sleep when she was there.” (lol)
29. “She bought a pink phone.” (??)
30. “She slurped her tea.” (#fail)
31. “Her mum friended me on Facebook. The only way I could get around the friend request was to dump my girlfriend.” (Facebook - responsible for many a hook-up + breakup)
32. “I am chaotically messy and I lived in constant fear that she’d try to tidy up under the bed. I don’t know what’s under there, but whatever it is I didn’t want her finding it.” (She waited for you to dump her?!)


So guys, which of the above can you identify with?

Ladies responses to same survey coming up in next post!! :-) xx